Are you thinking about traveling to the beautiful county of St. Lucia? We bet you are! Before going, we have put together a little guide to everything you need to know about St. Lucia before you travel.

A Little about Saint Lucia

Saint Lucia also was known as the Helen of the West, which got its name from the French, who named her after St. Lucy of Syracuse. It is located northeast of the island of St. Vincent, North West of Barbados and south of Martinique. This beautiful island covers a land area of 238.23 sq. miles and has a population of 187 768.  The capital city of St. Lucia is Castries located right in the heart of the island.

About the Weather in St. Lucia 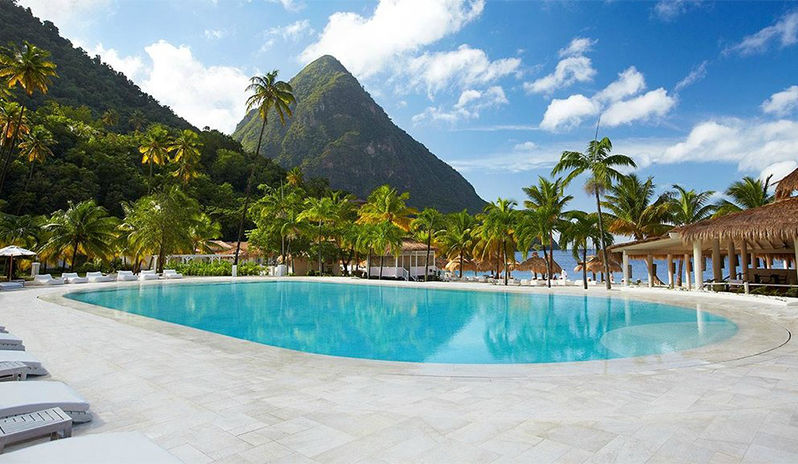 The best time to travel to Saint Lucia is literally any time. Whether you want to go in Spring, Summer, or Fall, this little island has something to accommodate your every need. In December, they celebrate the festival of lights where the honor the patron St. Lucy, after whom St. Lucia was named. In the month of May, the Jazz festival is celebrated, with different musicians from all around the world. In the mid-month of July, the streets come alive with soca and steel pan music as the country sets into their carnival season. August is chocolate heritage month, so if you have a sweet tooth, here is something exciting you can look into. The time to celebrate the island’s Creole/French heritage is in October.  This event is known as Jounen Creole. When it comes to St. Lucia you can never run out of things to do, from enjoying the sun and the cool breeze from the ocean to taking in one of the local festivals.

About the People of St. Lucia

The people of St. Lucia are called St. Lucians.  They are a mixture of many different nationalities with about 85% of the population being pure African, while the other 15% of the population is a mixture of British, African, East Indian and French. The people of St. Lucia are larger than life itself. Their personalities are filled with charm, warmth, and sophistication. The island is a reflection of the people, with their happy-go-lucky attitude, their colorful accent, and their endless energy. The people of St. Lucia are so warm and friendly that they will bring any shy person out of their shell. They are also known for their love of parties, so you’ll be sure to have a good time when among these locals.

The Language of St. Lucia

The official language of St. Lucia is English; however, a larger percentage of the island speaks the native Creole/Patois language. The Creole language was created as a result of the shared French Creole heritage and a combination of British and French denomination during colonial years. This language is used widely by St. Lucians to express their French heritage and is easily understood by those who speak French since it is so close to their own dialects. 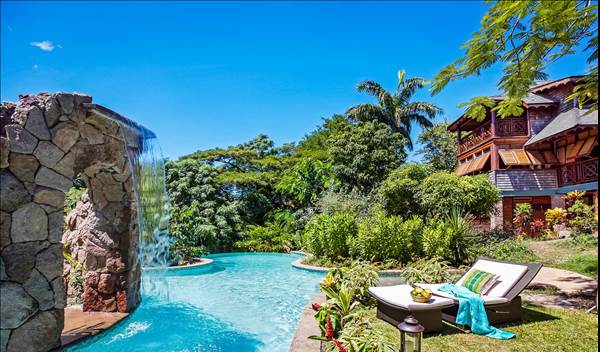 Accommodations can be one of the biggest costs while traveling and being able to reduce those costs would allow you to have more money to spend on all the fun stuff. Here are a few things you can do to stay in luxury while still staying under your budget. To save on the cost of staying at a resort you can choose to stay at an Airbnb with a hired chef. As a bonus, you get to really experience the island as a local, and if you are traveling in a group, this would be a great money saving adventure for you. Looking to do the touristy things? There are some amazing all-inclusive hotels on the island that offer everything from paid tours, activities provided by the hotel, an amazing night sleep in the most comfortable beds, and just an all-around carefree, laissez-faire vacation. If you can’t decide between resorts and local life, you can always try some of the amazing guest houses and villas on the island. They provide the comfort and feeling of home without having to do too much on your vacation. The host of these Villas/Guest Houses are very accommodating, they help you with your booking, tell you the best places on the island to visit, and just make you feel like you never want to leave.

Looking for untouched greenery, beautiful mountains, and volcanoes? Then St. Lucia is the island for you! This Caribbean island has so much to offer. It is also one of the only islands where you can literally drive through a volcano. The scenery of the island is breathtaking, and if you feel like getting out there and hitting a hiking trail, you can climb the island’s Gros Piton in just four hours. Another one of St. Lucia’s natural beauties is their Botanical Gardens. Luscious green forest with the most beautiful flowers and an amazing waterfall where you can go for a refreshing swim. St. Lucia has so much to offer, but don’t just take our word for it, get on that plane and experience the adventure that is St. Lucia.

One of the most amazing things about St. Lucia is their cuisine. It is made up of a combination of French, East Indian, and British dishes. Their national dish is called green fig (banana) and salt fish. Some of the other famous dishes on the island are breadfruit and salt fish, buyon, which is made up of meat, plantain, dasheen, yams, and dumplings. St. Lucia is also known for its fresh fruits. Because of the island’s very fertile land, fruits like mangoes, avocados, pineapple, tangerines and so much more are grown right there on the island. The restaurants are known for their fresh seafood meals. Having the day’s catch right at your table is something we dream about.  So whether you’re in the mood for some upscale Creole food, or just the street vendor selling you some grilled fish, St. Lucia has it all. 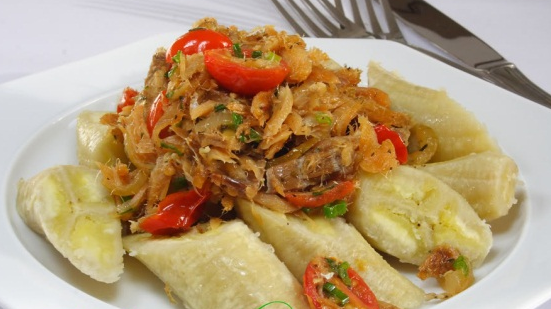 The Flag the Anthem And the Coat of Arms

The St. Lucian Flag was designed by Sir Dunstan St. Omer who is regarded as one of St. Lucia’s leading artist. The colors in the flag represent, the blue for the sky and the sea, the black and white represents the harmonious relationship between the people, the yellow for the sun and the triangles represents the Pitons which is a national symbol of St. Lucia. The flag was adopted in 1967 to replace the British blue ensign when they got their independence.  The National Anthem was written by Charles Jesse and the music by Linton Felix Thomas.  The Coat of Arms has different symbols. The Tudor rose is a representation of the English influence on the island. The small brown stool represents the African heritage of the people brought to the island and the touch is a beacon to light the path to the future. 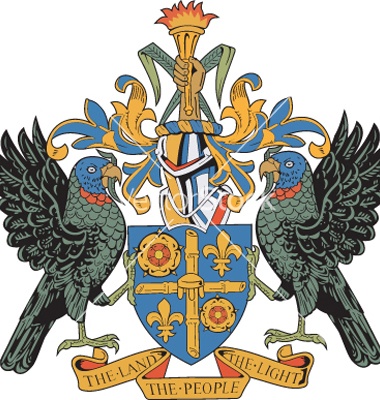 The Beaches of St- Lucia

There is no shortage of beautiful beaches on this island. Choosing a favorite beach here is near impossible. St. Lucia is known for its white sandy beaches, clear blue waters and cool breeze from the ocean. The great thing about these beaches is that there is so much to do, from snorkeling down in Anse Chanet to just lying under the Cabana at pigeon island, that you’ll never run out of activities. There are also restaurants and bars along the beaches so you could never go hungry while swimming. The hotels on the beaches also allow you to use some of their stuff for a small fee so there will always be something to do.

The St. Lucia parrot, also known as the Amazona Versicolor or Jacquot is the national bird of St. Lucia. This is the only parrot that St. Lucia has. It blends into the forest at night but during the day it shows its beauty as it’s red, blue and green feather as the light up in the Caribbean sun. Its name versicolor is Latin, and it means of many colors. It’s name says it all about it, with its green wings, blue face and forehead, red breast and maroon coloring near the belly.  The primary colors are dark blue and the tail has a yellow tip. It is distinguished by its piercing screeching and its crackling noises.

This parrot can only be found in St. Lucia. Because of the epidemic in 1975, the trust was asked to help by starting a captive breeding program for the species. The prime Minister returned home with the captive breed in 1989. Because of deforestation, and effects from the hurricanes, the species began to die out. Although the parrot has been protected since 1949, the legislation was largely ignored until 1979 when it was made St. Lucia’s national bird.

There have since been protection programs through pride education to help save the species. The are approximately 500 parrots living in the wild right now. You can book a tour to visit this rare bird with Rain Forest Adventure.

St. Lucia has two airports, the first being the Hewanorra International Airport which is located in Vieux Fort. It is the largest airport in St. Lucia and is managed by the St. Lucia Air and Seaport Authority (SLASPA). It is 53.4km (33.3 miles) from the capital of the island which is Castries and it is 2744 miles, 9003 ft.

The other is the George F.L Charles Airport. It is located 2 km north of Castries. It is the smaller of the two airports. It is also managed by the St. Lucia Air and Seaport Authority (SLASPA). It is parallel to the vigie beach which is a popular tourist attraction. It is 1898 miles and 6227 ft.

You can find out more about which cookies we are using or switch them off in settings.

This website uses cookies so that we can provide you with the best user experience possible. Cookie information is stored in your browser and performs functions such as recognising you when you return to our website and helping our team to understand which sections of the website you find most interesting and useful.

You can adjust all of your cookie settings by navigating the tabs on the left hand side.

Strictly Necessary Cookie should be enabled at all times so that we can save your preferences for cookie settings.

If you disable this cookie, we will not be able to save your preferences. This means that every time you visit this website you will need to enable or disable cookies again.